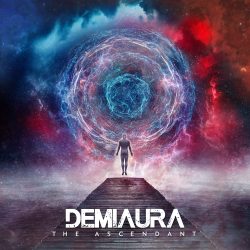 Get DemiAura’s debut album The Ascendant, which features ten songs that were mixed and mastered by Brad Cox at Black Paw Studios in Lawrenceville, GA.

Vocalist Chelsea Wrathchild says, “The Ascendant has a lot of musical depth and complexity, as well as definitive moments of tension inside the songs that make you wonder what’s just beyond the horizon. The uncertainty propels you forward, yet there is some solace and solitude waiting for you on the other side. This is exactly how we felt creating the album – the ethereal cover art was unintentionally representative of how we were able to pull this project together against the odds, pass through that veil, and ‘ascend’ to the next phase of the band. We hope listeners will immerse themselves in the experience and keep an open mind about this modern perspective of progressive metal.”